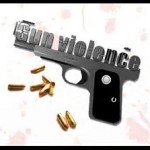 Journalists have been talking a lot about “gun violence” recently. I am not sure that is the right combination of words to use.

Journalists have been talking a lot about “gun violence” recently. Is that the correct combination of words to use?
When I was a boy, my father and grandfather took me deer hunting in Wisconsin. They taught me gun safety and we talked about shooting animals for sport and for food. I didn’t kill anything on those hunting trips, but I learned a lot. One thing I learned is that guns can be used for good and for evil.

Now, my point. As Journalists we know our words and ideas are powerful and can add gasoline to an already fiery debate. I am wondering if using the term “gun violence” in our stories and our graphics is unwittingly showing bias and taking a political stand. This is not to say we can’t report about proposed gun control, or new gun laws or even the violent people who use guns to hurt and kill and intimidate. We must, but we also need to do it accurately and without unintended bias.

As I am writing this, I am watching the latest round of cable news interviews and stories talking about the need for law enforcement to have more power to investigate threats made by people. He said, “when someone tells a friend that they want to grow up to be a serial killer, we need the power to fully investigate that person”. He was not talking about a gun being the violent threat, he was warning us about people being violent.

Now, before you start accusing me of being sympathetic to the NRA, let’s consider the words we use as journalists and our responsibility to be accurate. That question is the only question I am proposing. We don’t use the term “vehicle violence” when we write stories about car crashes involving speed or impaired driving. We don’t use the term “knife violence” when we write stories about stabbings. So, why do we use “gun violence” when talking about shootings? Talk about this in your newsroom. It’s a legitimate journalism question.

A while ago, I asked my friend and fellow journalist Al Tompkins at the Poynter Institute this question and I want to share some of what he said. We need to have this debate to make us better communicators. Tompkins said, “I think gun violence might be different from gun use for something other than violence (hunting, sport) for example.” In other words, use the words that best describe the situation.

Guns are objects. They are not inherently violent. Using the term “gun violence”, I believe, is an editorial decision that needs to be considered carefully. Other examples are the terms “pro-life” and “anti-abortion”. Pro-life is a description being promoted by those who are against abortion because it sounds better. Journalists need to use “anti-abortion” because it more accurately describes the movement and not the marketing strategy.

So, next time someone uses a gun to kill and you are the journalist assigned to write the story, think about this discussion and the term “gun violence”. Is it the right term to use?