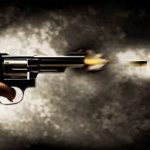 (I am writing short stories about the TV news stories I have covered over the years and what they have taught me. This is one of them)

Most of the time we were rushing to stories, but this time the story came rushing to us with the velocity of a speeding bullet.

It was a rainy, cold fall day in Indianapolis in 1979 and I had worked all day. It was 7 p.m. and I returned home to my small, studio apartment on the north side when my pager went off.

As I grabbed a Coke from the refrigerator, I also grabbed the phone and called the assignment desk. They needed me to check out some police action developing in my neighborhood.

The photographer arrived at my apartment door a few minutes later in the Ford Bronco loaded down with equipment and we headed east just a few blocks to an apartment complex. The on and off rain of the day was now a cold downpour. You could hear the raindrops on the leaves of the trees surrounding the building.

When we pulled into the complex, the place was crawling with police. We were blocked from the main parking lot, but an officer told us the command post was set up around the south side of the building.

I walked over to the man in charge and he told me that a team of officers had tried to serve a warrant on a man in one of the apartments. This man was mentally unstable, he said, and the warrant was an authorization to take him in for treatment. But, instead of cooperating, the man had pushed the officers away, locked the apartment door and was threatening to shoot them. The cops believed he had several guns.

So far, they established phone contact with him, and the SWAT team was called to stand by. This was a stand off, but clearly the police were not interested in using force to take in a mental patient.

I called the assignment desk on the radio and told them the story. The night desk suggested I just stay there and see shat happens. It was going to be a long night.

We were with the cops in the parking lot, but we could not see the actual apartment and we knew if we were going to get any videotape to help tell the story we had to find a spot where we could see the action. This was the right thing to do, but it turned out to be a very dangerous thing to do.

It was now getting late and the rain was not letting up. The police were hunkering down for a long night of trying to negotiate with a crazy man to get him to lay down his guns and come out. We drove our news van into a school parking lot next to the apartment complex where we could see the double glass patio doors and the kitchen window of the apartment where the man was holed up. There was a small grove of trees between the building and us but the trees were sparse and we kept moving closer and closer to get a better look.

We got to a point where we were no more than 50 yards from that double glass door. We parked the truck and waited. I was in the driver’s seat. My photographer was in the passenger seat holding the camera so he could be ready if anything happened.

Then, suddenly, I heard a crash! I stood up next to the open driver’s side door and my photographer did the same on his side of the truck. He lifted the camera to his shoulder and I grabbed the microphone and held it above my head while standing behind the truck door.

The SWAT team had lobbed a tear gas canister into the apartment. I could see the gas billowing in the kitchen and the police with guns drawn beginning to move closer to those double glass patio doors. We had a great view of the action. The police were making their move and we were going to get it all on videotape. The tear gas worked, but it turns out our efforts to get the best pictures also put us directly in the line of fire.

I was standing behind the driver door and I saw the double glass patio door slide open. Out of the cloud of tear gas, I saw the man. He was coming out. He had a gun in each hand and they were pointed right at us. The police were yelling; I could not make out what they were saying. The camera was rolling the microphone was ready.

The man did not drop the guns; he started firing. The first bullet hit the front of our truck with a “ping”, but I really didn’t realize it was a bullet. I was focused on the man. Then the next bullets hit the grill “ping ping”. He kept shooting. My head was in the “V” formed by the truck door and the frame and I felt it brush my ear. A bullet had missed my head by less than an inch. I felt it whiz by”! I dove into the driver’s seat and so did my photographer. “Ping”, “ping”, “ping”, three more slugs hit the front of the truck. My photographer lifted the camera back up again pointing it toward the apartment. The man had stumbled on the lawn and the police had them in their sights. “Boom! Boom!’ The shotguns went off! The man fell, immediately. The stand off was over.

I looked at my photographer and I could see from the look on his face that he felt the same as I did. All I said was, “I guess we got too close” and he said, “I guess so.”
We were nearly killed. One headlight on the truck had been shattered. It was a very close call, but that fact became even more dramatic when we returned to the TV station early that morning and put the videotape into the playback machine.

The photographer had gotten it all! We had the billowing tear gas and the SWAT team ready to pounce. We had the patio door flying open and the man with the guns staggering outside. And, we had the bullets.

When the tape got to the point where the slug came close to me, it was the sound that shocked me. I was holding the microphone about two inches from my head while standing next to the truck. When I played the videotape, you could hear the bullet go past it and it is a sound I will never forget. That bullet went screaming past that microphone with a “zzzeeeeeeeeeeeaaaaaammmmmmmmmmm!!”. I could actually hear how close I came to dying. I will never forget the sound of my very close call. Life is fragile.

The Big One That Got Away
Top
One Moment in Time