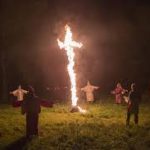 (I have been writing stories about some of the stories I have covered so far in my career. Each one has taught me something about myself or the profession.)

Fire changes things. It makes food better. It makes dark nights brighter and warmer. It also destroys and frightens. That is what this story is about, the night I was an uninvited guest at a Ku Klux Klan cross- lighting.

In the Los Angeles suburb of Lakeview Terrace, there isn’t much excitement. It’s a neighborhood of blue- collar values, soccer games for the kids after school and usually quiet evenings. It was December 3rd, 1983 and I was working for KCBS-TV. As the investigative reporter for the station, our team was digging into a story that was both dangerous and exciting. I had been approached by a man named Peter Lake. Peter was a freelance journalist with a taste for danger. His previous claim to fame was locking himself in a cage underwater to videotape a killer shark. This next assignment would be more dangerous for him and for us.

Peter had infiltrated a national group of white supremacists. The Aryan Nation group was headquartered in Hayden Lake, Idaho but its tentacles stretched nationwide. It was affiliated with the local Ku Klux Klan chapters including the one in southern California headed by Grand Dragon Tom Metzker. Peter had become the groups videographer and had convinced the members he could be trusted. He was our person “on the inside” while we worked to expose the tactics of this hate group from the outside looking in.I have already written about my face to face encounter with Pastor Richard Butler, the head of the Aryan nation group. He was competing with leaders of the Klan, the Aryan Brotherhood and other smaller hate groups for members and money and attention. (http://tvnewsmentor.com/the-blue-eyed-enemy/) But, on one evening in Lakeview Terrace they all came together to make a statement about their power to terrify.

Peter Lake sent word to me that they would all meet in the backyard of a supporter and light 3 crosses on fire. Cross-lightings have been used for decades to frighten blacks in the south. The crosses would be lit in the front yard of a black family or the supporter of that family. It was meant as a warning. This ceremony in Los Angeles was meant to send a message too, Lake told us. He said they wanted Blacks, Jews and Asians in the area to know they were not welcome. The crosses were scheduled to be doused with gasoline and lit just after sundown. I left the station in Hollywood with photojournalist Eliot Fons. We had worked together many times before, but we didn’t know what to expect tonight. Lake told us that we would have to park several streets away and make our way to the hillside backyard by climbing up a steep slope in the back of the property. If we were seen the ceremony organizers would be angry and he would not be able to protect us. He warned us to be careful.

Eliot and I made it to the property line as the sun was starting to set. We could see several men getting ready to pull ropes and lift the 3 big, wooden crosses into holes dug in the ground. We hid in some thick bushes, trying to remain quiet. We saw them douse the sheet-wrapped hay bundles with gasoline and tie them to the crosses. We also saw our “insider” Peter Lake videotaping it all up close. If they only knew. We stayed hidden in the bushes, just 20 yards from the crosses. When it got dark, the men began coming out of the house and heading to the ceremony location. Some were dressed in leather jackets or t-shirts. We could see their faces. Others were covered head-to-toe with traditional Klan robes and masks. They gathered in a circle around the crosses. I heard the voice of Pastor Butler welcome everyone and thank them for the show of support. It was hard to hear everything from our spot in the bushes, but every few seconds there was cheering and applause. Then several men set the crosses on fire. We could feel the heat. The cheering got louder and louder. We didn’t dare even breathe. Some of the men were assigned as security and they had spread out along the properly line. They had rifles and sidearms. One of them was standing about 15 feet in front of us with his back turned. Eliot had propped his camera next to a log and pointed it at the ceremony. Any movement by us might tip them off.

Then, suddenly, some of the men started running. There were shouts of “police, run for it!” It seems the Los Angeles Police Department had been tipped off about the cross-lighting ceremony, too. Officers were crashing the party and making arrests. We didn’t hesitate. Eliot grabbed his camera and I had the microphone and we jumped out the bushes and began videotaping the chaos and arrests. We had our LAPD press passes around our necks and we managed to stay out of the way for a minute or two, but then we were both grabbed from behind and handcuffed. I tried to plead with the officer and show him my pass, but he didn’t have time to negotiate. He pushed me toward another officer who led me and Eliot to a row of squad cars on the street in front of the house. A sergeant finally came over and we were able to reason with him. He checked our press passes and ordered the handcuffs removed. Then he asked, “what the hell were you guys doing here and how did you know about it?” I said, “same way you did sergeant, someone tipped us off.” He took my business card and warned that the department might want to see our videotape. I warned him back that it would take a subpoena. He was not happy.
Peter Lake was arrested that night, but the video he shot and the video Eliot got hiding in the bushes helped us show the real story of hate that night in southern California.

That was just one of a series of stories we did about the Aryan Nation and the Klan. Peter stayed in the group for another several months, reporting back to us daily and sharing video. I had always read about the life of blacks in the South. To me it was a story in a history book, because I had never lived it. Now I had, albeit in a different way. Now I could appreciate the fear felt by those who are the targets of these hate groups. I will never forget the feeling of the heat on my face as those crosses burned.