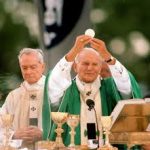 (I have been writing stories about the stories I have covered, so far, in my career. Each one taught me something about myself or the profession)

If you have ever been in an emergency landing in a jetliner you would remember it, right? Well, I don’t.

In 1987, Pope John Paul II came to the United States and began a 7-day tour of 8 U.S. cities. I was chosen by KCBS-TV in Los Angeles to travel with the Pontiff and file reports from each city. It was going to be a grueling work trip with long hours and difficult conditions, but it was also exciting. It was not the first time I had covered the Pope. In fact, earlier in the year we went to the Vatican to do a preview series on the Catholic church and I got the chance to meet the Holy Father. That was amazing. (I have another story coming soon about the meeting)

This historic papal trip began in hot and rainy Miami. Each stop had a different theme but each one had the same general outline. The pope would arrive, meet local government and church officials and then hold a huge mass for people who had been waiting in line for hours to get near their religious leader. In all, we would end going from Florida, to South Carolina, to Louisiana and on to San Antonio. Then the trip took us to Phoenix, Los Angeles, San Francisco and finally Detroit. Our KCBS team had a spot on the pope’s media plane, so we were on a tight schedule and traveled with him everywhere. It was in New Orleans that I had an experience I can’t remember, but will never forget.

The stop in New Orleans was a tough one. The Pope had his event at an arena in the suburbs, but our “live” shot location was downtown on the roof of an old brewery. By the time we finished it was long after midnight. We didn’t get any sleep because the flight leaving for San Antonio was leaving in just a few hours. We made it and I collapsed into my seat on the TWA L1011. I immediately fell asleep.
When I woke up in a sleepy haze and looked around the plane it was nearly empty and we weren’t moving. We were still on the tarmac! I glanced to my right and saw one of the other reporters sitting in a seat across the aisle and asked, “Where are we?” She said, “New Orleans.” I was confused. I had been asleep for nearly 3 hours and we were still on the ground in Louisiana and the rest of the reporters and crew on board were gone. We should have been on the ground in San Antonio.

I got up and went to the front of the plane and found some other reporters playing cards. I said, “what are we doing here?” One of them looked at me puzzled and said, “did you sleep through that?” He told me that during take-off from New Orleans the plane started shaking and the pilot declared an emergency. He said, “we made one circle in the air and landed hard. It was an emergency landing!” He told me it would be another hour for repairs before we could try to take off again.

I had slept through the entire emergency landing! I was too tired to be scared. So, now I tell the story about my close call during my coverage of the Pope, but I don’t remember any of it. We took off again heading for Texas. There were many parts of that exciting assignment I remember, but I regret being too tired to remember this one.