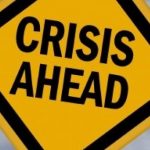 Everyday there is a new post on LinkedIn lamenting the great exodus going on in TV and Digital newsrooms nationwide. People are packing up their backpacks and leaving the profession claiming burnout and a lack of respect by those who own and run those newsrooms. News organizations are having trouble finding people to take their place. It’s a “crisis”.

It’s not surprising. It’s what I call “Management by Crisis”. For years, in the broadcasting and journalism world, workers have been talking about how salaries are shrinking and workloads are increasing. Changes in technology and the new demands of social media to share journalism are stretching journalists to the limit. At the same time, newsroom salaries and benefits are being pulled off the table. There is a “take it or leave it” attitude among some managers and owners, so producers and reporters and photographers and anchors and writers are deciding to leave it. The crisis is real.

Here is why I call it “Management by Crisis”. Some managers could see this coming. Just like a faulty roof with a forecast of heavy rain. They knew as soon as the rain began, the roof would start leaking. Some tried and tried to get the attention of their division managers or corporate leaders, and some listened. The ones who tried to be proactive were forced to implement cuts anyway. Some even were forced to add newscasts or web duties but added no additional staff. However, some ignored the warnings of a coming crisis. They didn’t want to be the ones who asked the owners or the CEO for more money to fix the roof before it began leaking. Maybe, they were hoping by the time the leaking started, they would be able to blame someone else for the problem.

Well, the problem is here in TV and digital newsrooms now and we are all screaming “crisis”! The major media companies are having emergency meetings to deal with it. They are begging for middle managers to come up with solutions. Some are scratching their heads wondering how this could happen, when some who saw it coming kept quiet. That’s management by crisis, wait until the ceiling starts leaking before responding and fixing it.

This latest leak will be stopped. There are some very smart veterans who are working on solutions for this crisis. If you are one of them, let’s all work together to find a way out. But, what’s the next leak? Will we fix this one but then cause another crisis with the solution?

Listen to your middle managers and your workers. Ask them how they can do their job better and safer and easier and then act. Don’t fall into the “Management by Crisis” trap. Recognize the crisis before it hurts your people, your station, your organization or the profession. Let’s fix this one and learn from it.