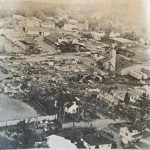 (I have been writing stories about some of the stories I have covered so far in my career. Each one taught me something about myself or my profession.)

We can now instantly shoot and send video around the world from our phones. That was not always the case and that made covering news even more of a challenge. You could have the greatest story and the most amazing video, but no one would see it unless you could get it back to the station in time for the newscast. This story is about taking the ultimate risk/reward in order to do your job.
Just over 4 decades ago, in 1977, I was working for WFRV-TV in Green Bay. It was August and that means summer storms in Wisconsin. I had worked all day and was finally home. Dinner was done and we were just watching TV when we saw the tornado warning. It was not to Green Bay yet, but the storm was heading this way.

A short time later the phone rang. The night producer told me to get into the station fast! The boss was sending me and a photographer to Wausau, in Marathon County, where there are reports of a tornado touchdown with significant damage. Wausau is about a 90-minute drive from the station. It was going to be a long night.

I met Chief Photographer Del Vaughn at the station. He already had the car packed and ready. WFRV had just received its’ first videotape news camera. We were going to use it tonight.

Let me outline the tools we had to work with the cover this breaking news. There were no cell phones, just phone booths that took a quarter to make a local call. We had no “live” trucks or microwave connections. We had no computers or wi-fi links to the station. We were heading out into the night to chase the destruction of a tornado with a camera and a pocket full of quarters.
We arrived in the outskirts of Wausau. It was dark. Power was out everywhere, but we didn’t see much damage. We drove to the middle of town and took a right turn and saw the flashing lights on the fire trucks and police cars. The tornado had ripped a patch through a residential neighborhood just west of the city. We got as close as we could, grabbed the gear and headed down the first street. It was the first time I had witnessed the damage from a tornado. It was eerie. We saw a two-by-four turned into a spear that had pierced the side of a metal camper. We also saw a telephone pole turned into a porcupine. When a tornado hits it creates extremely low pressure. That low pressure opens the pores of the telephone poles and the wind blows sticks and straw into the open slots. When the tornado passes, those hole or pores close quickly trapping the debris. The pole looks like it had hair! The power of this storm was amazing. We shot video, did interviews and even told the story of a woman who was found a block from her home still sitting on the mattress from her bedroom. The storm had taken her for a ride. We had great stuff, but no way to get it back to Green Bay. The next newscast was the morning broadcast and we had to stay in Wausau until the sun rose.

We took a break and found a truck stop open near the interstate that runs through town. We were frustrated, we could not get to the station and back in time for the morning news conference, but we wanted our video to get on the air on the morning show in two hours.
There was a truck driver sitting at the next table and I had an idea. I slid into his booth and introduced myself. I asked him where he was heading next. He said, “Green Bay. I am dropping my load at the Proctor and Gamble plant on the east side of town.” The plant was about 5 minutes from the TV station. I took a chance. I grabbed the ¾ inch videotape from the machine and handed it to him. This was our only video and if we lost it we had nothing to show for our long night. I said, “would you drop this at the guard gate when you pull into Proctor and Gamble? I will have someone from my station drive over and pick it up.” He smiled and rolled his eyes, “what’s in it for me?” I laid a $20 bill on the top of the tape and said, “you are going that way anyway, wanna make an easy 20 bucks?” He nodded, grabbed the money and the tape and he was gone. We watched the big rig and our night’s work heading out of the parking lot. Del and I wondered if we would ever see our great video again.

I called the station and told them the plan. If the driver did what he agreed to do, WFRV would be the only station with tornado coverage for the morning news programs. We all crossed our fingers. Del and I went back to work covering the story and about two hours later I called the newsroom to see if our scheme had worked. The driver did exactly what he promised. The videotape was waiting at the guard shack. Our intern picked it up and our stories and video made the morning broadcast. In the end, this storm injured 30 people. Luckily, no one died. Winds were clocked at 150 miles per hour.

We had to cover the story and we found out there is always a way. It was risky trusting a truck driver, but what good is great video if you miss the deadline. For us that night, it was a prayer and a twenty-dollar bill that did the trick.