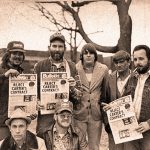 (I am writing stories about some of the stories I have covered, so far, in my career. Each one taught me something about myself and the profession)

Sometimes it’s not the story that you remember, it’s the food.

In the late 1970’s, I was a young reporter working for WTHR-TV in Indianapolis. It was December of 1977 and the coal miner’s union decided to go on strike. Southern Indiana is full of coal mines and miners, so this became a major local story.

We left the station very early one very cold morning heading for the union coal mine. It was dark when we left and all we had was coffee to keep us awake and warm. WTHR Photojournalist Pat Thatcher was a veteran and I was glad to have him manning the CP-16 film camera. We knew the miners could be a difficult bunch, especially when they were on strike. Many didn’t see the media as their friend. Many were just tough, hard-working coal miners who didn’t like outsiders from Indianapolis invading their neighborhoods.

We made great time and arrived near the mine entrance about an hour before the first scheduled shift change. That is when the first picket lines were supposed to appear and when we could get our first reactions. Pat and I were sitting in the news car with the engine running and the heater going full blast. It was below freezing. He turned to me and said, “I’m hungry, let’s get something to eat”.
He put the car in gear and headed back toward the main road. He said, “I am dying for some hot biscuits and gravy!” I had no idea what he was talking about. I had never heard of biscuits and gravy! I said, “what the hell is that?” Pat looked at me like I was crazy, “you have never had biscuits and gravy?” Nope, I said. Don’t know what they are but I am willing to try anything. Growing up in Wisconsin, we had cheese curds and beer for breakfast sometimes, but never biscuits and gravy. It’s traditionally a southern dish and this was my first time living outside of Wisconsin, so I was learning all kinds of new things. We pulled into the snow-covered parking lot of the café and, with a sly smile, Pat said wait here I will get you some biscuits and gravy.

This coal miners strike was a big deal. It was not just Indiana miners’ this was what they called a “wildcat” strike of miners in several midwestern states. It was clear the union leadership had little control over the men and that made it dangerous. This was life and death for the workers and no one knew how far they would go to make their point.

I saw Pat push the door open and walk toward the car. He was carrying a brown paper bag, like the kind we used to get at the grocery story. He jumped in and set the bag between us. “Let’s get back to the mine road,” he said, then we will dig in. The car filled with the smell of sausage. That’s what it smelled like to me. During the short ride back to the mine, Pat again was amazed that I had never tasted biscuits and gravy. He said it was a staple in his home growing up and it reminded him of his family. 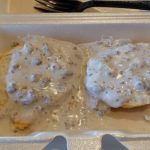 We stopped at the mine entrance. No one was there yet. Pat opened the paper bag and handed me a plastic fork and a Styrofoam food container. It was hot on the bottom, but it felt good in the cold. I opened the lid and, for the first time, saw biscuits and gravy. It was gray. OH! It smelled great, but it was just a pile of gray slop. Pat said, “dig in” and I did. Cautiously at first, but after the first couple of bites I was hooked. It was delicious! A young man from Wisconsin who moved to Indiana was now becoming more of a southern food lover.

We finished our breakfast and just as the cars of the striking miners began to arrive. We put on our caps and gloves and got our gear from the truck and began working. Our stomachs were full.

The strike was very violent. It lasted over 3 months. During another one of our trips to cover the strike action, the tires on our news vehicle were slashed in a union headquarters parking lot. The miners were feeling the pressure and didn’t want the media to see it. The strike lasted more than a year.

It was a good story but mostly, that day, it was a good breakfast. It’s one I will never forget.

Restoring Credibility Podcast: It will save TV news
Top
A Party of Hate and Fire