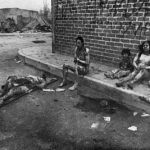 (I am writing stories about stories I have covered, so far, in my career. Each one has taught me something about myself or my profession)

Once you see something horrible, you can never erase it from your memory. In 1984, I worked for KCBS in Los Angeles and didn’t know that the images and stories of what happened in Mexico that November Monday morning would stay with me forever.

When I got to the newsroom, I was immediately told to get ready to fly to Mexico City. A huge liquified petroleum gas facility near Mexico City had exploded and the fireball created burned through a nearby slum neighborhood. It was horrible. The death toll was rising by the hour.

When we landed, we discovered it would be a 45-minute drive to the disaster zone. The boys selling newspapers on the curb along the way were yelling the headline, just two words, “Fuego Mortal”, or “Deadly Fire.” 40,000 people lived in the town of San Juan Ixhauatepec, a poor suburb of Mexico City and home to the largest liquified petroleum gas plant in the country. Most of the men living in town were either farmers or they worked at the gas plant. As we got closer we were forced to stop and walk. The roads were jammed with people. Some were walking out with shocked and stunned looks on their faces. Some carried knapsacks or blankets tied at the top. Others were walking with us heading into the fire zone. They were scared. They needed to find their loved ones. We came over the top of a Hill and saw the valley below. There was no color. Gray smoke was billowing from the fires still burning at the plant in the distance. The neighborhood next to it was gone except for the walls of charred homes. These were not big houses, they were adobe shacks with wooden doors and plywood roofs.

Police were trying to keep people away, but it was no use. It was imposible to secure the huge area and local officials told us they didn’t know how they were going to get to and identify the dead. This was a huge crime scene, but we were waved on in and that is when the story changed. We didn’t come to the story, it came to us in a very dramatic way.

We started walking down one of the burned out streets. Everything was touched by the flash fire. The trees were black and bare. The cars were gray and gutted. Even the seats were gone. Just springs remained. We walked up to a man sitting on the curb in front of one of the houses. We asked him in Spanish, “Is this your house?” He said no, it was his brother’s house. “Where is he?”, I asked. He said he was inside and gestured me to walk in the front door. There was no door. It had been burned from the hinges. The man followed behind me and my photographer led the way. As we approached the end of the hallway entrance the photographer stopped and turned to the room at the right. I slipped behind him and saw a family frozen by fire. The sofa was just a metal frame and on it were 3 bodies. They were black, charred remains of three humans caught in the conflagration. They had no time to move. The fire came like a flash flood.

I just stood there not believing my eyes. I turned to the man who we met outside and he nodded and said in Spanish, “That’s my brother and his family. They had no were to run.” Back outside again, we kept walking and found children looking for their missing parents. We found women sifting through the black dust looking for mementos. In virtually every house or back yard we saw bodies. They were burned beyond recognition. It was hard to tell if they were men or women. We could tell the children only because they were smaller. The real story I want to share is what I saw in the eyes of those we met wandering the streets here. They were emotionally stunned, just like we were. They were seeing death everywhere and becoming immune to it.

There is no accurate count of how many died in this industrial accident. The initial number was 248 people killed. We went back to the neighborhood several years later to investigate reports that the government buried more than one thousand victims in a hillside nearby. The houses were being rebuilt. The people were moving back in and, surprisingly, the huge liquid petroleum plant was still there, back in operation right next door.

Flying Blind
Top
Don’t Confuse Me with the Facts