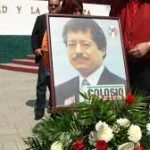 (I have been writing short stories about some of the stories I have covered in my career, so far. Each one taught me something about myself and the world)

I was in 6th grade when we got the horrible news that President John Kennedy was assassinated. It was the first time I realized the power of television. I was glued to the coverage of an American tragedy. It ignited my interest in journalism.
Many years later I found myself covering another assassination and drawing comparisons to the Kennedy murder. This time it was in Mexico where there is no holding back the passion or emotion. I have been in the middle of wildfires, riots and even a KKK cross lighting but felt what I felt during this story unfolding on the streets of Mexico City.
It was 1994 and I was the main anchor for KCOP-TV Real News in Los Angeles. The AP bulletin was only one line about an assassination attempt in Tijuana against Mexican presidential candidate Luis Donaldo Colosio. The wounds from two bullets fired at close range during a campaign rally eventually killed the popular candidate. It was a major political and personal story for millions of people on both sides of the border.
We landed in Mexico City for the funeral just 24 hours after the assassination and there were already banners and signs posted on lights posts and walls depicting Colosio’s face. Some mourned his death others were demanding justice. The signs should have been a warning that we were walking into a country where many people were now hurt, angry and afraid. Our first stories drew comparisons to the feelings of Americans in the days after John Kennedy was shot in Dallas, Texas. The man accused of shooting Colosio had already been captured and some were linking him to a political conspiracy to affect the election.
The official memorial ceremony was held at the main offices of Colosio’s political party, the Institutional Revolution Party, or PRI. Security was tight and the ceremony was closely controlled and planned, but then the day became more chaotic and I was caught in the middle of it.
We followed the black hearse carrying Colosio’s body to a neighborhood on the south side of the city. A small, family funeral was planned at a funeral home there. But, as we approached the area, we saw the streets jammed with people. The hearse stopped. We jumped out of our rented car and saw the back door of the hearse open. Several men grabbed the flag draped box, lifted it on their shoulders and began carrying Colosio’s body toward the small funeral home about 4 blocks away.
The people on the street pressed closer and began chanting, “Colosio, Colosio, Colosio”. There were no police, no security, just people wanting to get close to the man they considered their leader. Some of them were crying and reaching to touch the coffin or the colorful Mexican flag that covered it. I looked up, as we struggled through the mob, and saw women standing on balconies waving handkerchiefs. Tears were streaming down their faces.
Colosio was supposed to be their political savior. He was the candidate promising to speak for them. He was young and handsome and leading in the polls. The people of this neighborhood were saying goodbye, not just to the man, but to their dream. Some were angry. They told me they believed the mayor of Mexico City hired the man to assassinate Colosio. They wanted justice.
I was caught in the middle of a grieving mob but I did not feel afraid. Instead, I could feel the love these people had for the man and the hope he gave them. I could also feel their frustration and anger. They knew they would never really know who killed him and why. They were powerless again, except for the power of their tears.
We arrived at the funeral home. The casket was taken inside, but the people remained outside. It seemed to be they just wanted to be close to him. They were praying. Colosio was their John Fitzgerald Kennedy. I will never forget the raw emotion I felt that day walking shoulder to shoulder on the streets of Mexico City with people who had their hopes killed by an assassin’s bullet. It changed Mexican politics forever. It changed me too, just like Kennedy’s death changed me and this country in 1963.

The Blue-Eyed Enemy
Top
A Red, White, and Blue Diaper