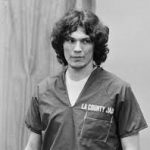 (I am writing stories about some of the events I covered, so far, in my career as a broadcast journalist. Each one taught me something about life, the profession or myself)

When an inmate in leg chains is led into a courtroom, it is the sound that grabs you before anything else. I still remember the clanking of the metal sliding across the floor as I covered the trial of serial killer Richard Ramierz, the so called “Night Stalker”.
During the mid-1980’s, someone was breaking into homes in the Los Angeles area raping and killing women. It appeared to be random and that made it more terrifying. People living near freeways were warned to be especially careful. The person doing it was ruthless and brutal and kept getting away. In some cases, the killer would gouge the eyes of his victim. The break-ins all happened at night, so the media began calling him the “Night Stalker”. Police said they had very few leads.

I was working as a reporter for KCBS-TV. We were all covering the sexual assaults and killings and the fear that gripped the city and the suburbs. The “Night Stalker” was responsible for 14 killings over 14 months. Finally, in 1988, police captured Richard Ramierz and when he made is first appearance in a Los Angeles Superior courtroom, I was there. A bizarre case was about to get even crazier.
The day of the arraignment was a media circus. It was the first time the community was going to see the man, police say, who had been terrorizing them for months. The judges in Los Angeles, at the time, allowed cameras in the courtroom and we were there. It would not take long, and there was not much mystery about what was going to happen. Ramierz would be led in and stand behind a glass wall. He would be officially charged with 14 murders and he would be ordered held with no bail.

Some people in the courtroom that day were relatives of the victims. They, too, wanted to get a glimpse of this man accused of raping, killing and mutilating their loved ones. The room was packed and hot and buzzing.We heard the lock on the door to the holding cell bang open and a moment later we saw him. His hair was long and wavy. He looked gaunt. But, it was his eyes that were different. They were sinister. The man we had called the “Night Stalker” looked like someone who Hollywood producers could cast as a frightening killer.
The judge came in and asked everyone to come to order. The clerk began reading the charges and when she finished the judge asked Ramierz, “How to you plead?”. One of his lawyers quickly answered, “not guilty your Honor!” At that moment, Ramierz looked agitated. He raised his left hand, exposing his palm to the packed courtroom and he yelled “Hail Satan!” There was a gasp. The deputies grabbed him and quickly led him from the room and the place was buzzing. I heard people saying, “what was that printed on his hand?”

It was a pentagram. Drawn in ink from a ball point pen. A pentagram is an ancient religious symbol adopted by those involved in witchcraft or devil worship. Richard Ramierz had one on his hand in court while yelling, “Hail Satan!” I heard some in the courtroom mutter, it proves he is the devil. 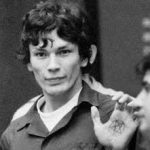 I remember feeling frightened myself. The fear that gripped the community was real and so was what we had just witnessed in a court of law. A man accused of the crime talking about the devil and flashing a symbol to prove he meant it.
I was also there in the same courtroom, months later, when he was found guilty and sent to death row at San Quentin. This is when, for the last time, we heard those leg chains clanking on the tile floor as he was led in. Occasionally, he would turn around in the courtroom and flash an evil look to the reporters sitting behind him. Richard Ramierz lived up to the name we had given him, “The Night Stalker”.

An Explosion of Emotion
Top
Running Toward the Danger