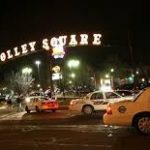 (I have been writing stories about some of the stories I have covered, so far, in my career as a journalist. Each one taught me something about life and journalism)

It’s just not natural to hear gunshots inside a shopping mall. They echo, and so do the screams.

I had just finished my salad in the newsroom at ABC4 in Salt Lake City. It was Valentine’s Day 2007. I sat right in front of the assignment desk and it was always noisy. The police radio scanners were turned up loud and I tried to ignore them. Then, we heard it and could not mistake the urgency. The dispatcher was calm but forceful, “a man with a shotgun inside Trolley Square Mall, we have an active shooter, there are casualties”.

I shot out of my desk chair and ran to the counter. We were all stunned. Trolley Square was a high-end shopping mall on the north side of downtown Salt Lake City. We didn’t wait for more info, I grabbed my bag and ran for the parking lot. The photographer met me there, we jumped in a van equipped with a microwave transmitter and headed for the mall. It was only a 5-minute drive.
During that drive I got more information. The shooter was pinned down inside by the police and the desk had received a call from one of our reporters. She was inside shopping and was now trapped in a supply closet with other shoppers. She was on the phone and relaying what she was hearing through the door.

As we got close to the mall, the streets were jammed. There were cars filled with people trying to get away and there were police cruisers everywhere. Instead of waiting in the truck, I jumped out and told the photographer I would meet him on the other side of the building. With my bag over my shoulder, I ran toward the east doors of the mall. There were police everywhere, some with their guns drawn, but they paid no attention to me. I ran right up to the mall door, grabbed it and entered the food court area. I took two steps and froze. The gunshots echoed through the brick hallway leading up to the main floor. It was a pistol shot, then another. I ducked behind a planter near the door. We didn’t have cellphones with video recorders, so I could not record anything, but I could listen. I heard yelling. I could not make out what was being said, but the tone was desperate.

Suddenly, one of the police officers ducking with me nearby decided I should not be there. He pointed and ordered me outside. I ran to the door and pushed it open. The cold air hit me. I stood there for a moment. I couldn’t move. I ran around the outside of the building to the west parking lot where all the TV station vehicles were parked. I put in my earpiece and called the station. I got a little more info from the assignment desk and found out that our reporter who was trapped inside was OK and heading for my location to do an interview.

As always happens, the next few hours were a blur of live reports, phone calls, coaxing witnesses to talk and answering questions from the anchors back at the station. I talked about my experience, but I still didn’t have time to really process it. I had heard the two shots that killed the gunman. I had walked into the mall just moments before the police moved in on the man with the shotgun in the greeting card store. It was Valentines Day and the place was filled with people.

Five people were killed and four were wounded by the gunfire. Police never determined a motive. I will never forget the sounds. The gunshots and the yelling. I was in the right place at the wrong time. I think about those killed and wounded every Valentines Day. They were trying to hide from the danger, I was running toward it.

A Red, White, and Blue Diaper
Top
An Explosion of Emotion