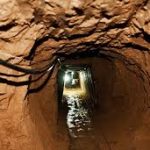 (I have started writing stories about some of the news stories I have covered over my career. Each one taught me something about life. I hope this one teaches you something.)

One of the most uncomfortable things I have experienced so far in my journalism career is waiting to find out if someone missing is dead or alive. My first taste of this moment came in 1975, at the beginning of my career, in a muddy parking lot on the west side of the Fox River in Green Bay.

The metropolitan sewer district was digging a tunnel. It was a huge undertaking. Drilling hundreds of feet straight down and then horizontally underneath the Fox River and then up to the surface again on the other side. It was one of those projects that mostly goes unnoticed until something goes wrong and on a rainy Monday morning in May something did go very wrong.

The men digging this tunnel were a combination of local men and construction workers from around the state hired to come here until the job was done. They were always aware of the risk of digging underground, but they took precautions and the money was good.

The tunnel they were digging would carry a simple, but large, sewer pipe to help support the growing population of the city. It was the Packer football team that put this city on the map, but it was the paper industry that kept growing the population.

I was new to the newsroom at WFRV-TV. I had just graduated from college and this was my first full-time job as a reporter. On this Monday morning when I arrived in the newsroom I got my assignment right away. There was an explosion underground. Four men were trapped. Rescuers were trying to reach them. They are staging a command post on the west side of the river.

My thoughts while were scrambled. How was I going to cover a story for television that is happening hundreds of feet underground in a tunnel under a river? I, remarkably, wasn’t thinking about the lives of the trapped men. It seemed ridiculous that they would not be brought out alive. It was my first story that involved the potential for death. My mind wasn’t ready to grasp the possibility.

I was learning. I didn’t know they could build a tunnel under a river. I didn’t know about methane gas and its’ dangers. I was struggling to tell the entire story and I nearly missed the human story that was about to unfold over the next three days.

The soil under the riverbed had not been disturbed for thousands, maybe millions of years. People who dig in this environment are always worried about finding pockets of methane gas. You can’t smell it. That makes it more dangerous. The workers, I know now, place detectors in the tunnel where they are digging to warn them of danger. On this Monday morning, they apparently didn’t work. The gas built up and something sparked a huge underground blast. The men were trapped. They could not get out and the rescuers could not get to them and know one knew if they were even still alive.

The men were all from Wisconsin, but they were not from Green Bay. At the first news briefing by the fire chief, he refused to release their names but said rescuers are doing all they can to reach them and bring them out safely. We had no reason to believe that was NOT going to happen and happen soon. It didn’t. Communication with the men had been cut off and the first firefighters who went into the muddy tunnel came back dirty and frustrated. There was no easy way in, so the decision was made to dig a second tunnel to try to get air to the trapped men. But it was risky. There could me another explosion.

By day two the reality set in. These men might already be dead. I had been focusing on stories about the process and didn’t really put myself in the shoes of those men or their families. That changed when a fire chief’s car pulled into the command post and a woman and two children got out. Reporters and photographers crowded around them. The chief pushed us away. They were led to the mouth of the tunnel opening and the captain leading the rescue effort talked with them for about 5 minutes. The woman handed the captain an envelope. He put it in a plastic bag.

When the woman and two boys turned and walked away we started walking toward them. It was clear they were “family” and this where the story changed for me. We pushed the microphones toward her face. She looked confused and in shock. She said she just wanted her husband out alive. She cried. The note in the envelope was for her husband trapped in the tunnel, if they could get to him. She said, “it simply says I love you”.

The next two days were a blur of more rain, mud, anticipation, despair and more tears. More family members arrived. Volunteer construction workers from all over the state came to help dig that second tunnel into the main one hoping to find the men alive and get them some air. When they finally broke through on day 3 they confirmed the worse. The men were dead. The explosion didn’t kill them. The air ran out.

It was my first story involving tragic death. I will never forget the sound of the crying when the fire chief went to the window of the van where family members were waiting.
It’s a sound I hear in my head, even today.

One Moment in Time
Top
The Feeling of Evil?